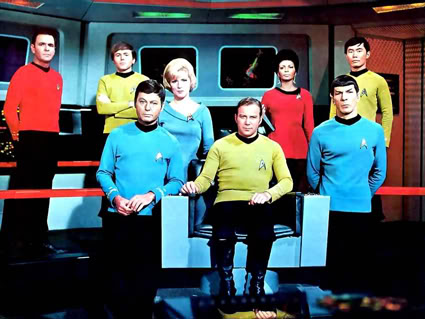 Since the 1960s, the renowned Star Trek franchise has entertained audiences with stories of spaceships exploring far off galaxies in the future. Over the decades, a vast mythology has been formed, and the various races and factions of Star Trek are relatively well known. Their flags and banners can be seen throughout the numerous episodes and movies in the series.

This is the leading organisation which is seen throughout the show. It is an alliance between various planets, including Earth. Their flag is a deep blue which is meant to represent outer space. In the middle is an oval with a galaxy of stars inside it. This flag is most prominent in the first two films.

Originally the Klingons and the Federation were at war with one another. However, in Star Trek VI The Undiscovered Country these two factions unite together. Later in the series, a flag representing this union can be seen. It is light blue, and there are two shapes on the top and bottom of the banner. They look similar to both a F

ederation and a Klingon ship.

Starfleet is the central organisation which controls the Federation ships coming to and from planet Earth. Their flag contains the iconic three-pointed symbol which is now synonymous with Star Trek. This image is also on the badges of Starfleet members. There have been two versions of this flag seen in the series. One is bright and yellow, whereas the other is grey and understated.

Before Starfleet cadets can go out into space, they must first be educated at the academy in San Francisco. This is where they learn the ethos of the Federation, as well as how to engage in space battles. The banner is dominated by an image of the well known Golden Gate Bridge. This is the most famous landmark in the city. Above the bridge, the Starfleet symbol can be seen in bright red.

The Klingons are a brutal race of war-obsessed aliens. The designers of the show wanted to make their flag similar to that of the Nazis. Therefore it shares the same red, white and black colour scheme. Three asymmetrical shapes can be seen in the middle, in front of a white circle.